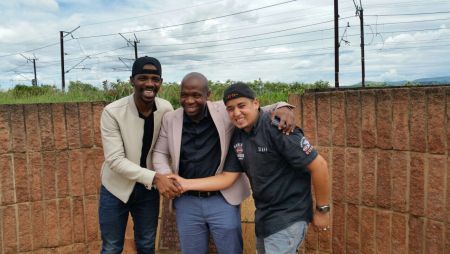 On Friday 24th February 2017, our sales consultant, AD, had the privilege of joining “The Famous Ride” – an initiative by Zakes Bantwini. Zakes is a legend in the local music industry and also happens to be one of our customers! Below is Ad’s experience of the day.

“We set out from CBD Durban (SABC building) through to Nelson Mandela capture site in Howick early on Friday morning. Luckily the weather played along and made for a great trip! We had a police escort out of Durban all the way to BP Oasis on the N3 . You can imagine the reaction as +/- 40 motorcycles roared through Smith Street! Add to that, the sound of police sirens and the town was brought to a standstill as we passed through.

The ride was led by Zakes on his Harley-Davidson® Heritage Softail® Classic motorcycle. We stopped over in Pietermaritzburg at an old age home (Isabel Beardmore Home for the Aged) where we dropped off a donation that had been collected by sponsors of the ride. This included blankets, groceries and a new big screen TV for the residents of the old age home. They were delighted at the gifts!

Our group was received by the Mayor of uMngeni municipality, Sizwe Sokhele, as well as MEC, Nomusa Dube, at the Capture site. A few words were spoken at the site about what the site represents and how it relates to bikers.

We then had a delicious lunch which was provided by Nto’s catering (Nto is a proud Harley® motorcycle owner and rider herself!) before heading back to Durban. The MEC also joined us on her Trike.

The objective of this awesome ride was to create a program that touches on tourism,road safety, social cohesion and music all at the same time. Thank you to Zakes for inviting us and allowing us to be a part of this special day!”